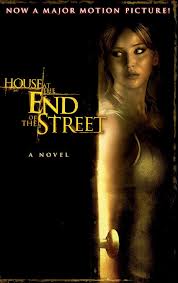 I’ve tagged this review as both a book review and a movie review, because this “novel” is in fact a hastily written movie tie-in that reads like the Cliffs Notes version of the script. There is no author name on the cover. When exploring the title pages one finds the following explanation: a novel by Lily Blake, based on the screenplay by David Loucka, from a story by Jonathan Mostow. Lily Blake’s name is also attributed to the Snow White and the Huntsman movie tie-in “novel”, which I’ve got here somewhere for review too. A quick Google turns up no photos or meaningful information about Lily Blake, so I can’t tell you anything insightful about this author (except that I don’t believe she really exists and is instead probably a personification of a gaggle of entities churning out these sort of movie promotional tomes).

The House at the End of the Street starts off in Twilightesque fashion with a teen girl (played by The Hunger Games’ Jennifer Lawrence in the film) leaving the big city and moving to a quiet country town. Elissa and her mother score an impressive house cheaply due to its grisly history – the couple who lived there previously were murdered by their mentally handicapped daughter, Carrie Anne, who then disappeared without a trace. In true Twilight fashion, Elissa is the focus of many boys in her new town, but her own interest lies with strange and brooding Ryan, Carrie Ann’s brother, who still lives reclusively on the property in a separate house. Then, to use the phrase on the back of the book, “unexplainable events begin to happen” (ugh). There’s a twist that is fairly obvious from  early in the tale, although to be fair, it probably works much better onscreen. There’s also a lot of gratuitous use of “spooky” kids and tugging on the heartstrings ineffectively, which I tend to get my back up about these days, as a parent. If you’re going to use kids in horror, use them well, and use them with respect.

Putting aside my sneery judgemental jabs at cynical money-grubbing exercises masquerading as literature…the book goes through its motions pretty much as you would expect it to. I would class it as YA, and teens would probably enjoy it. It’s a quick read, not atrociously written, but certainly with nothing inspiring between its covers. The prose is cold and simple (and there are quite a few typos – hence my “hastily written” comment earlier). Whoever did actually write it phoned it in and didn’t bother to hide the fact – and why would they. This accompaniment to the movie is what it is. I didn’t hate it. I read it all the way to the end. I did feel dirty afterwards, but I read it anyway. I’ll probably go see the movie, as it’s a competent enough teen thriller, albeit predictable and cliched. What came across as one dimensional in print may do a far better job onscreen with Lawrence and others injecting life into it. It’s very hard to judge a movie when it’s slammed between paper covers and dubbed a “novel”.

Don’t bother reading it, but if you like teen slasher flicks with a bit of a psychological twist, you might enjoy the movie. I’ll go along to see if I do.