The eagerly awaited seventh installment in the highly regarded, award-winning anthology series from Cemetery Dance is now finally here and well worth the wait.

Bookended by two prestigious reprints by Clive Barker (a fantasy tale previously published as “Hermione and the Moon”, now re-titled “The Departed”) and by Stephen King ( “Weeds”, firstly appeared in Cavalier and Nugget magazines in the ‘70s), the hefty volume collects twenty-four other stories, mostly original and mostly of excellent quality. Some are indeed outstanding and I will start by mentioning those.

“Red Rover, Red Rover” by Norman Partridge is a superb piece of supernatural horror revolving around a drowned little girl’s dog and raising the question whether live persons can be scarier than ghosts.

The astonishing, surrealistic ”Born Dead” by Lisa Tuttle reveals the incredible secret in a successful businesswoman’s life, while the riveting , dark “The Baby Store” by Ed Gorman ( a cross between SF and crime) addresses the accidental death of a little kid.

In the strong and gripping “Memory Lake” by Robert Morrish , small town old , dirty secrets and crimes are literally unearthed, and in the nasty, graphic “Beholder” by Graham Masterton, the statement that Beauty is in the eye of the beholder is pushed to the extreme consequences.

Having presented my own favorite tales, I must proceed by pointing out a group of remarkably good stories which contribute to make Shivers VII possibly even better than the previous, terrific six volumes.

Bill Pronzini’s “Breakbone” is the disquieting report of the nightmarish meeting with a loser who will finally reveal his true nature, while Bev Vincent’s “Severance Package” is an ingenuous mix of horror and crime, only slightly spoiled by a rather moralistic ending.

Brian James Freeman contributes “As She Lay There Dying”, the perceptive portrait of a college professor struck by “runner’s block” after two close encounters with sudden death, and Kaaron Warren offers “Sleeping with the Bower Birds”, a dreamlike, atmospheric story where strange birds fly around, new clothes shine and an odd family goes on with life.

Many, many reasons for securing immediately a copy….

Readers can visit the Midnight Shop page on the ME website to see all the titles now available, or to place a pre-order for upcoming books: http://midnightechomagazine.com/the-new-midnight-shop/.

“For those living in Australia, this deal means you no longer have to pay the expensive international shipping costs when you order CD books. And don’t forget that you can also order the latest copy of Dark Discoveries magazine from us, too,” ME Executive Editor Marty Young said.

Midnight Echo has also released details and the Table of Contents for its next issue, #9.

The Table of Contents:

The Road by Amanda J Spedding

The Wee Folk by JG Faherty

From the Forebears by Steven Gepp

The Fathomed Wreck to See by Alan Baxter

Allure of the Ancients: The Key to His Kingdom – story by Mark Farrugia, illustrations by Greg Chapman

Pre-orders for the limited print edition are now being taken. Please visit www.midnightechomagazine.com for full details. 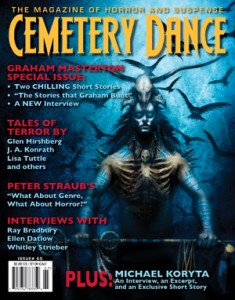 OK, full disclosure: I’m only new to reading Cemetery Dance Magazine, having started reading from issue #61, but from that very first issue I was hooked, eagerly awaiting its appearance in my mailbox every few months from the US.

As a reader and writer of horror I have found the magazine and its contents to be essential, with its fiction, non-fiction, reviews and opinion pieces always providing me with insight and inspiration.

Issue 65 is a massive issue, profiling the work of UK horror legend Graham Masterton and including two new stories by him. In total the issue contains 10 new short stories and four interviews and five other features and of course all the usual fare of reviews, news and publishing trends. The issue apparently experienced some delays in production and did take longer than expected to arrive, but it was still – and always will be – worth the wait.

The issue kicks off with the Masterton interview – a fascinating Q&A, which provides an insight into a truly captivating author. He talks candidly about his time as the author of several sex guides, but its Masterton’s comments on how he only recently came to admire his novel The Sleepless that I found the most interesting, because I (and many more of his fans) believe it’s one of the best books he’s ever written.

Masterton’s two new tales provide proof of his skill. Anka is a chilling tale of the real-life horror of child neglect, melding with the Baba Yaga myth. In his typical style, Masterton gives the characters plenty of heart and soul, only to terrify them with equal measures of ghastly imagery and little hope for a happy ending.

Saint Bronach’s Shrift however is reminiscent of a parable, with two brothers settling their differences in an apparent dream state. Masterton takes a little-known story about a saint and his medicinal brew and twists it to meet his own ends.

Matt Williams examines Masterton’s stories in great detail, analysing how the author balances myth and fact in his tales. He also puts forward that the author’s strongest skill lies in his ability to create wholly believable characters. I think CD’s review of Masterton’s vampire novel Descendant, actually proves it’s the author’s ability to reinvent old ideas that is his greatest prowess, but maybe that’s just me.

CD moves away from Masterton briefly to offer us an interview with Michael Koryta – a rising star in mystery fiction. The interview is far too short, but the excerpt from one of his novels, The Cypress House, and his tie-in short story more than makes up for it. The tale, Winter Takes All, gives the reader the opportunity to learn more about the tragic past of The Cypress House’s main character, a seemingly reluctant psychic. I’m now very curious about Koryta’s work.

There’s an interesting interview with Maurice Broaddus – the “Sinister Minister”, but it contains many references to what he’s going to be up to in 2010? All the same, Broaddus’ life outside of his writing, makes for interesting reading.

His story for the issue, Rainfall, is a neo-noir tale that paints a gritty picture of a PI in search of his sister’s killer. When the PI meets a man who offers him the chance to “go back”, there are, of course, dire consequences awaiting him on the other side.

My favourite tale in the issue however is Glen Hirshberg’s After-Words, a mesmerising tale of a world where books are forbidden and how a small band of anarchists seek to restore them to their former glory through evil means. Authors and readers alike will relate to the drug-like effect books can have and Hirshberg explores that well in his story.

J.A. Konrath also has a story, Dear Diary. What starts out as little more than the diary entries of a naive, lovelorn teenage girl, takes a satisfyingly dark turn in the final moments.

The most interesting opinion piece in the issue is Peter Straub’s What About Genre, What About Horror? Straub exposes some hard truths about genre fiction and clarifies a few misnomers about people’s opinion of horror fiction. Straub highlights the work of Michael Connelly in his piece as an author who remains “honest” to his work, but in his enthusiasm (which is most welcome) he inadvertently flits between referring to him as “Connelly” and “Connolly”. We’ll forgive him that though.

The brief Ray Bradbury interview focuses, unfortunately, on his aversion to e-books and technology as a whole. I would have preferred to know what writing he was up to, if any, or what appearances he has been doing, anything other than going over the same old e-book debate.

Another great column to read was Mark Seiber’s reminiscence on the value of libraries to authors as well as readers and how they hold a wealth of great classic fiction – never a truer word spoken Mark. Robert Morrish’s Publishing Spotlight column, among other things, provides an in-depth interview with Bad Moon Books’ owner Roy Robbins. Robbins’ years of experience as a bookseller and calculated publishing choices have helped him gain much success and respect and should serve as a template to emerging small presses. Amongst Morrish’s book picks, he gives out some quite a bit of praise to Aussie author Terry Dowling, particularly highlighting his collection Amberjack.

Another Aussie to be praised is Steve Gerlach. Reviewer T.T Zuma says Gerlach’s novella Within His Reach, could “easily have been the basis for a Twilight Zone script”.

Lisa Tuttle’s story Manskin, Womanskin offers a unique take on human coupling and actually points out the importance of love in a relationship, by putting sex in a supernatural context.

The second to last interview features anthology queen Ellen Datlow; the most fascinating aspect being that despite not having “any interest” in writing fiction, she is still the finest gatherer of horror fiction in the industry – and she despises paranormal romance!

David Bell’s tale, The Book of the Dead is a marvellous blend of morbid curiosity and confronting grief; when a young woman who loses her husband on the same day of John Lennon’s assassination. The prose has a quiet resonance that stays with you well after you’ve read the final words.

Whitley Strieber’s interview reveals a very frank and honest author; frustratingly his answers are all too brief.

In the final story, The Town Suicide, S. Craig Renfroe gives the reader a depressing repertoire of inexplicable suicides in a small town and there’s not a sliver of hope to be seen anywhere, not even after the main protagonist manages to stop his girlfriend from taking her life.

All in all a very enjoyable issue; Cemetery Dance continues to deliver the goods with fresh, memorable horror fiction and with issue #66 (supposedly shipping as of this writing) promising new fiction from the likes of the aforementioned Dowling, Steve Rasnic Tem and Jeremy C. Shipp, my mailman had better watch his back!

Horror in a Hundred – Shining Example by John Dromey

Shining Example by John H. Dromey   Returning from their honeymoon after a whirlwind courtship and a [...]

‘It Follows’ To Receive A Wide Screen Release!

RADiUS proudly announced today that the company is going wide with their smash success IT FOLLOWS. O [...]

I Want To Believe Fans of The X-Files will begin to believe again as it was announced this week that [...]

The Cutting Room: Let The Right One In

Let The Right One In Twelve-year-old Oskar is lonely, bullied and badly in need of a friend when he [...]