Robert Hood‘s complete collection of ghost stories will be released in April 2015 by IFWG Publishing Australia, in paperback and ebook formats. It will also be available in hardcover, and most notably, IFWG Publishing Australia will produce 200 limited edition copies, signed by Robert Hood. The cover and internal artwork is created by the very talented, industry-respected artist, Nick Stathopoulos.

Robert Hood is a highly respected, award-winning author, considered by many to be one of Australia’s grand masters of horror and weird fiction. Though over his 40-year career (to date) he has published speculative fiction of all kinds, he has notably produced 43 short stories that feature ghosts, hauntings and spectral horrors. These memorable tales display his ability to make the fantastic real, to embrace weirdness, and create human characters whose inner and outer lives, haunted by mortality, are laid bare and revealed to be our own worst nightmares. Ranging from melancholy reflections on life and death, through disquieting tales of dark humour and vengeance, to chilling visions of ghostly apocalypse, Hood’s stories are sure to draw you into a terrifying world that in the end is revealed to be irrefutably our own.

Peripheral Visions is a one-of-a-kind reference collection that includes all of Hood’s 43 ghost stories to date, three of them especially written for this volume.

“Rob Hood is Australia’s master of dark fantasy, seducing the reader with stories that are lavishly grim and rife with a quirky, unpredictable inventiveness.” (Sean Williams)

“Rob Hood is so good at what he does, he’ll have you believing in ghosts by the end of the first story in this brilliant collection.” (Kaaron Warren)

Peripheral Visions is a large volume of work, with a word count over 220k. In trade paperback format it will be published in two volumes, spaced over a month. Here is the appearance of the two covers, when laid side-by-side. 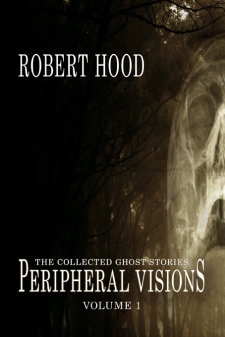 A single volume hardcover edition will also be published, with internal illustrations by Nick Stathopoulos. The exciting part of this publishing effort is a signed, limited hardcover edition, which can be pre-ordered now. There are only 200 limited edition copies available (numbered), each of which includes a Nick Stathopoulos-designed signature page, and a bonus ‘chap-ebook’ containing several zombie stories, titled Haunted Flesh: Stories of the Living Dead. These editions will disappear quickly, so we recommend interested readers pre-order now. IFWG Publishing Australia will not be repeating this offer.

Fight the Fright and Find the Light with ‘Nyctophobia’

What could be more frightening than becoming stranded in near total darkness, lost and alone? In Nyc [...]

Misery and Death and Everything Depressing – Book Review

Tim Major is the author of Carus & Mitch (Omnium Gatherum). His short stories have been publishe [...]

“Dark, creepy and nasty but has its tongue in its cheek.” When realtor Kent (Powers) finds a clown c [...]

What Is Horror? Horror is an ancient art form. For as long as we’ve told stories around a fire, it’s [...]

Look Out For… Dead Boys by Gabriel Squailia “Dead Boys heralds the arrival of a new and unique voice [...]